Dr Vinayak Rane from Bhabha Atomic Research Centre (BARC) is one of the recipients of INSPIRE Faculty fellowship funded by Department of Science and Technology. Dr. Rane’s INSPIRE project is primarily aimed at enhancing the sensitivity of magnetic resonance techniques.

He is working to enhance the sensitivity of both Electron Paramagnetic Resonance (EPR) and Nuclear Magnetic Resonance (NMR), by altering the spin populations transiently. So far, his group has successfully synthesised an EPR spin probe, which can generate 300 times stronger EPR signal at room temperature.

Magnetic resonance and optical spectroscopy are two powerful tools which have been the pillars of scientific investigation since early times. Importantly, the optical methods remain the primary choice when the problem being investigated demands high sensitivity. The inferior sensitivity of the magnetic resonance-based techniques is primarily due to the small population difference between the magnetic levels under usual experimental conditions. In fact, this issue is severely faced by researchers working in biological systems due to their limited sample volumes.

The strong signal enhancement produced by Dr. Rane causes the saturation of the EPR detection system. This is the largest enhancement demonstrated so far in any radical spin systems. Moreover, this strong EPR enhancement can be transferred to nuclei in order to enhance the NMR signals (via the dynamic nuclear polarization protocol). These results have already been noticed by the researchers working in National Magnetic Resonance Laboratory, Florida, USA, and they have now taken up this challenge of coupling the EPR and NMR enhancements, and Dr Rane is also a part of this collaboration.

These results have been published in the 2019 edition of where the large EPR enhancement has been shown. Also, a collaborative work has been initiated between Florida’s Maglab researchers and Dr. Rane’s group.

Dr. Rane, who found the INSPIRE faculty fellowship advantageous because of the independence which it offers to the researcher allowing sole focus on his scientific problems, will be completing his fellowship in August 2020.

On successfully demonstrating the NMR enhancements further, many fields where NMR is used, such as medical and pharmaceutical fields, would potentially be benefitted as a result of Dr. Rane’s efforts. 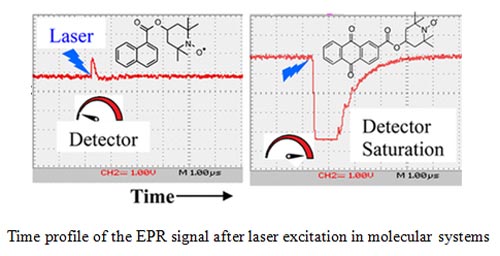