Advanced Research Centre for Powder Metallurgy & New Materials (ARCI), an autonomous institute of Department of Science & Technology (DST) celebrated International Women’s Day (IWD) while highlighting the trend of overall increase in extramural research funding for Women Scientists from 13% in the year 2000 to 29% in the year 2015.

Dr. G. Padmanabham, Director, ARCI, said that increase in extramural research funding to women scientists was a healthy trend, and many efforts were underway, such as being part of Athena SWAN (Scientific Women's Academic Network) initiated in the UK for learning from the best practices in this direction.  He also assured on all possible support at ARCI in increasing the equity of Women Scientists in their endeavors and success.

The IWD programme was organised by the Internal Complaints Committee of ARCI. Director, ARCI, in his address, focussed on the importance of gender diversity, which enhances the innovation and overall output in any organizational environment.  He said that the goal is to have equal opportunity and responsibility for both women and men, and several initiatives at different levels are being taken by the government and other relevant agencies world over.

“This goal of equality can be achieved by involving more and more women in various walks of life. This has also has increased in the recent past with women taking the lead in sectors like services, science and technology, business and so on,” he said.  He mentioned about initiatives of DST like Women Scientist Scheme, Knowledge Involvement in Research Advancement through Nurturing (KIRAN), and so on. KIRAN is addressing various issues related with women scientists lie unemployment, relocation, and so on.

Prof. Gita Sharma, Director, R&D at Tapadia Diagnostics, Hyderabad, a distinguished scientist and biotechnologist having expertise in virology, gene cloning, and molecular biology, was the Chief Guest for the occasion. She served as a Professor in the Department of Microbiology in Osmania University for 29 years as well as a founder Scientist in Shantha Biotech, Hyderabad, a well-known company in the field of biotechnology. She developed 16 products based on genetically engineered proteins to be used as a medicine or vaccines, of which six have been commercialized.

Prof. Gita delivered a motivational talk titled “Women Technopreneurs and Enabling Policies.” She narrated her story of becoming an entrepreneur from a scientist and a teacher. She also emphasised on the qualities required by a scientist to build a career as a technopreneur. She encouraged young researchers to do translational research, which contributes to the Nation’s economics. Her journey from scientist and professor to an Entrepreneur profoundly inspired the researchers and staff at ARCI. 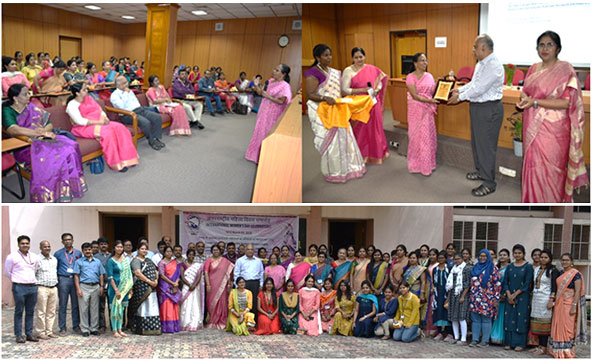