Recently, scientists from the Indian Institute of Astrophysics (IIA), Bengaluru an autonomous institute under the Department of Science and Technology (DST) have developed a state-of-the-art numerical code that generates new grids of transmission spectra for hot Jupiters --a class of gas giant exoplanets that are inferred to be physically similar to Jupiter but that have very short orbital periods. This can help probe the exoplanetary atmosphere furthering our eternal quest for our friend in the universe.

Prof. Sengupta and Mr. Chakrabarty from IIA developed the numerical code by solving the multiple equations based on energy transfer in the form of electromagnetic radiation of the non- zero scattering albedo (the measure of the diffuse reflection of solar radiation out of the total solar radiation). The code developed will provide an accurate analysis and interpretation of those spectra and hence probe the exoplanetary atmosphere. Their work has been published in the Astrophysical Journal.

The systematic scientific quest for ‘habitable’ planets and hence a possible answer to the eternal query of mankind –if we are alone or if life is a common phenomenon in the Universe,’ rekindled with the discovery of a Jupiter sized planet orbiting a Sun-like star 51 Pegasi in 1995 by Michel Mayor and Didier Queloz of Geneva Observatory. Soon, astronomers of various countries started hunting for new planets by using all available ground-based telescopes as well as dedicated telescopes in space.

Consequently, a large number of extra-solar planets orbiting stars of various kinds were discovered mainly by using transit photometry, a method that detects distant planets by measuring the minute dimming of a star as an orbiting planet passes between it and Earth. The passage of a planet between a star and Earth is called a transit, and radial velocity methods and the diversity in the physical properties of these planets revolutionized the concept on planets, planetary systems, and their formation. The next step was to probe the atmosphere of these exoplanets and to search for bio-signature in their atmosphere.

While planetary transit photometry provides important physical properties of exoplanets, it cannot explore the planetary atmosphere. It is the transmission spectroscopic method that can probe the physical and chemical properties of the atmosphere of exoplanets having a near edge-on orientation. During the transit epoch of an exoplanet across its parent star, a part of the starlight passes through the planetary atmosphere. The interaction of this star-light with the atmospheric material through absorption and scattering is imprinted on top of the stellar spectra.

A correct interpretation of these transmission spectra needs a comparison with a consistent theoretical model that incorporates all the physical and chemical processes in the planetary atmosphere. Today a few tens of gaseous exoplanet atmospheres have been probed in the optical and near-infrared through transit observations with the Wide Field Camera 3 onboard the Hubble Space Telescope.

Spectra were obtained for a number of hot Jupiters, and the synthetic spectra were compared with the available observed spectra obtained by using Hubble Space Telescope and Spitzer Space telescope. In the near future, the upcoming James Webb Space Telescope, ARIEL space telescope, and the Thirty Metre Telescope will be able to obtain high-resolution transmission spectra of exoplanets during transit spectra. 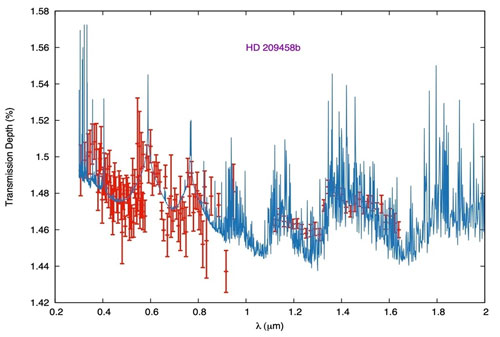