Scientists decode the reason behind the Chamoli disaster

Little more than a year after the deadly ice-rock mass avalanche in Chamoli district in the Uttarakhand state led to a significant causality of more than 200 people and a substantial economic loss; scientists have been able to decode the reason behind the disaster.

They have found that the region was seismically active before the disaster hit. A noteworthy sequence of precursory signals of rock-ice detachment was found to have been preceded by the formation of a new structure via self-assembly or self-organization called the dynamic nucleation phase – a process that can begin minutes, hours, days, months, or even years before the actual occurrence of the event.

The precursory signals reported in the study can be utilized for the development of an early warning system. Besides, decoding the reasons for such disasters would help characterize the seismic signals of such events, which can be utilized as one of the inputs for the decision support system.

Retreating Himalayan glaciers and associated melt along with unstable slopes are subject to trigger landslides by rainfall during monsoon or by induced seismicity in the region. Also, the snow, ice, and rock avalanches may threaten people and infrastructure downstream in mountainous areas worldwide. This is why the area requires constant monitoring of seismicity as well as glacier status.

Since its inception, the Wadia Institute of Himalayan Geology (WIHG) has been actively involved in understanding the processes responsible behind such disasters and focusing on detecting significant and unfelt activities with a dense network of seismic stations in the vicinity of Himalayan glaciers. As a part of this process, they have also tried to trace the reasons behind the disaster that took place on February 7, 2021.

The group of 9 scientists analyzed satellite images of the avalanche zone and found that it showed gradual growth of cracks and the joint near the crown of the weak wedge that has controlled the head scarp (steep region of exposed soil and rock when this is formed at the head or from where the failure surface ruptures the ground surface) for the last 5 years. These cracks further started to open up and led to successive advancement of weak zone near the crown of the wedge failure. The initiation of the ice-rock mass avalanche has been recorded as seismic precursors, which were continuously active for 2.30 Hrs before the main detachment took place.

Scientists analyzed and verified the seismic signals with field evidence to evaluate the velocity of dynamic flows and associated impacts. Such high-quality seismic data allowed reconstruction of the complete chronological sequence and evaluate effects from the initiation to the advancement of debris flow. The study has been published in the journal Scientific Reports.

Apart from the human loss, the impact of the flash flood was too high to sustain modern structures like hydropower projects, bridges, and roads. The high-flow intensity of the flood disturbed the stability of the Raini village, making the area prone to landslides, especially during the monsoon. 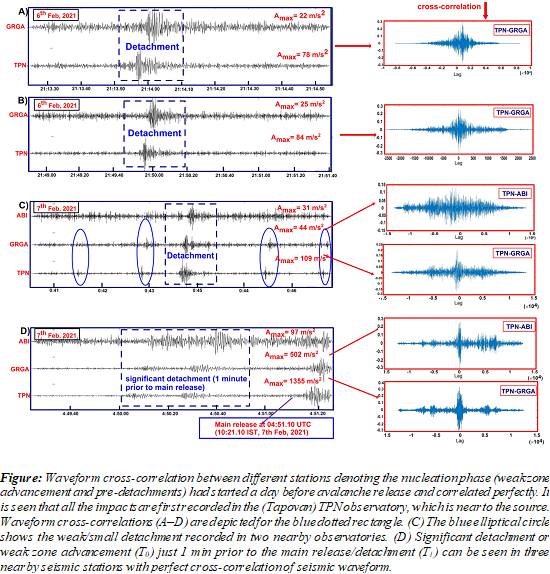 Such incidents may be avoided by recording precursory signals through seismic monitoring systems which could help detect mass movements such as debris flow, landslides, avalanches, and so on, providing the base for early warning systems (EWS) for the region.

This would require a dense network of seismic observatories, specially in the vicinity of glacierised basins of the Himalaya, with real-time monitoring and analysis of data. They could be integrated with hydrological, meteorological, and satellite data for the development of an early warning system (EWS) that can alert the people towards mitigation of any such impending disaster.