Scientists find clues on how some stars shed their outer layers 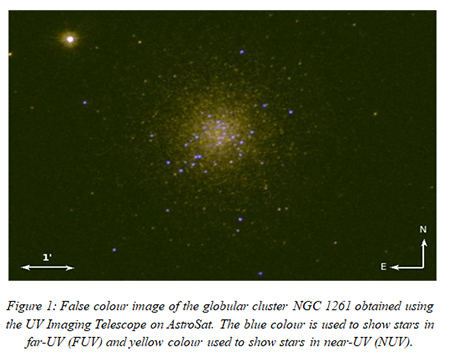 Scientists have found clues to the mystery behind the strange characteristics of hot stars at a certain stage of evolution called Horizontal Branch Stars that are bright in ultra violet light and explored how they shed their outer layers.

Horizontal Branch stars are in a stage of evolution that immediately follows the red giant branch in stars whose masses are similar to the Sun's. Astronomers have found that even though the horizontal branch stars emit similar energy, they show a large range in surface temperature, from a few thousand degrees to a few tens of thousands of degrees. Seeking to probe the mystery behind this, scientists at the Indian Institute of Astrophysics (IIA) an autonomous institute under the Department of Science & Technology, Government of India studied one group of stars in our Galaxy, NGC 1261.

Using the Ultra-violet Imaging Telescope (UVIT) on India’s first space observatory, AstroSat, to image this cluster, they found that hot stars emit copiously in the ultra-violet, whereas the relatively cooler giants and sun-like stars are undetectably dim in the ultra-violet. In the visible light, these hot stars are dim and difficult to locate them among the bright giants. The UV images were used to filter out the large number of cooler stars and to pick out the hot stars. This work has been accepted for publication in the journal, ’Monthly Notices of the Royal Astronomical Society’. 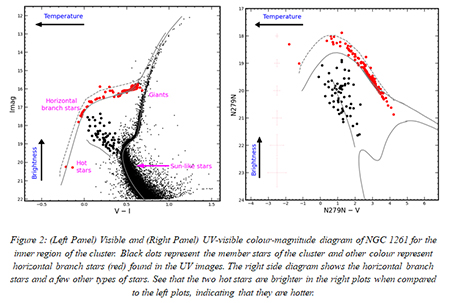 Ms. Sharmila Rani, a PhD student who led this study, says, “The amount of light emitted by a star is not the same in all wavelength, and depends strongly on the star’s surface temperature. Hotter stars emit more light in shorter wavelengths such as ultraviolet (UV), while shedding their outer layers whereas cooler stars contribute light dominantly in the visible to infra-red. Hence, hot stars are easily detectable in UV than in visible light. India’s AstroSat provides a unique opportunity to study hot stars.”

The scientists found that the horizontal branch stars appear in a continuous stretch. These stars are likely to become luminous stars as they age. Two stars were detected quite separated from the stretch, are found to be very hot, with a surface temperature of 30,000 degrees, as a result of a very thin envelope. They have lost most of their envelopes, when compared to the rest. The IIA team suggests that these could be stars that started their helium fusion in their core after evolving off the giant phase either during the crossing of the HR diagram or on the white dwarf cooling curve, known as hot-flash scenario. The team is carrying out an extensive search of similar hot stars in more clusters to confirm their findings.

For further details Ms. Sharmila Rani (sharmila[dot]rani[at]iiap[dot]res[dot]in ) can be contacted.