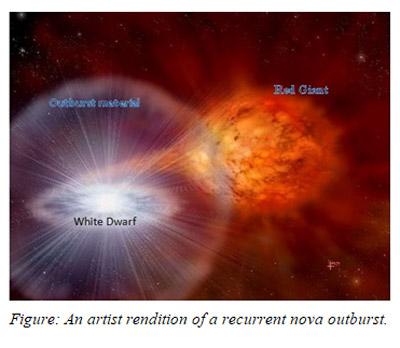 On August 28, 2019, Astronomers observed a rare explosion in space. They identified it as emanating from an interacting binary star system called V3890 Sgr, a symbiotic recurrent nova, and monitored the extended outburst. The analysis can now provide a better understanding of the evolution and properties of such rare stellar systems that has intrigued astronomers for a long.

Symbiotic stars (SySts) are binary stars that interact over a long period of time and consist of an evolved giant providing mass to a hot compact object. Usually, red giant transfers materials to a white dwarf. Symbiotic novae (SyNe) are a type of SySt in which white dwarfs experience thermonuclear explosions on their surface. When such outbursts recur in SyNe, they are categorised as symbiotic recurrent novae (SyRNe). The mass accumulates over the years. The temperature at the base increases, leading to an unstable thermonuclear burning of the hydrogen-rich envelope of accumulated material, which then expands, leading to a strong high-velocity wind. Subsequently, a nova is observed as the system brightens from its quiescent state. Once a large part of the envelope is blown, the winds stop, and the photosphere shrinks back to the size of a white dwarf size, and the nova, still very bright, appears as a super soft X-ray source (SSS).

SyRNe are extremely rare, and to date, only four have been detected, one of which is V3890 Sgr.

A team of astronomers from Indian Institute of Science Education and Research -Mohali, Indian Space Research Organisation, and Indian Institute of Astrophysics (IIA), an autonomous institute of the Department of Science & Technology, Government of India, came together to monitor it twice, for about 2 days and 4 days respectively using the Soft X-ray Telescope (SXT) aboard the AstroSat and had the unique distinction of observing it with the densest monitoring possible from a low-Earth orbit. The research has been published in the journal ‘Monthly Notices of the Royal Astronomical Society’. 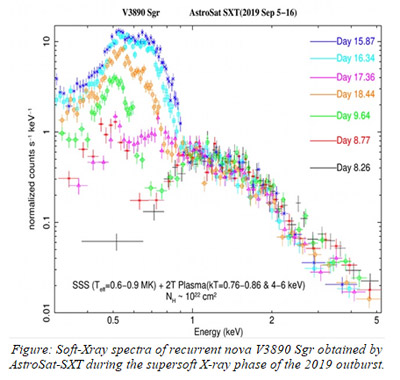 For more details, Dr. G.C. Anupama (gca[at]iiap[dot]res[dot]in) can be contacted.