Prof. Sridharan Devarajan, currently an Associate Professor in the Centre for Neuroscience & Associate faculty in Computer Science and Automation, Indian Institute of Science (IISc), Bangalore, is a recipient of the Swarnajayanti fellowship for the year 2021. He seeks to identify brain regions and neural mechanisms that mediate human attention, with potential applications in developing therapies for treating attention disorders.

The human brain has the remarkable ability to pay attention to important objects and locations in our world while ignoring irrelevant ones. Although attention has been studied behaviourally for many decades, we know very little about how attention works in the brain. Unexplored territories include--- identifying brain regions that allow us to sustain attention on particular objects, brain regions that suppress irrelevant information, and brain processes that are disrupted in disorders of attention.

Along with his group, Prof. Sridharan is employing combinations of cutting-edge, non-invasive technologies. Including functional and diffusion Magnetic Resonance Imaging (fMRI/dMRI), Electro-Encephalography (EEG), and Trans-Magnetic and Electrical Stimulation (TMS/TES) to both record and perturb human brain activity in a targeted manner.

In his recent work, Prof. Sridharan has identified how particular brain regions – both in the neocortex (outermost layer of the brain) as well as in the deeper midbrain – contribute to attention. His group has shown that human participants with asymmetric wiring between the midbrain and the cortical hemispheres also show marked asymmetries in the way they pay attention. In another recent study, they have shown that perturbing activity in a particular region in the neocortex (the parietal cortex) can affect participants’ ability to pay attention. To analyse and simulate how attention works in the brain, they also developed detailed mathematical and computational (deep learning) models of the neocortex and midbrain. This research has been published in various prestigious journals, including PLoS Computational Biology.

“While these studies from our group and others have hinted at the role of several brain regions in attention, very few have experimentally established these links directly. As part of the Swarnajayanti Fellowship, our lab will seek to understand “causal” mechanisms of attention in the brain. We will follow a three-pronged approach,” told Prof. Sridharan.

First, they will track changes in the structure, activity, and connectivity between specific brain regions (“neuroplasticity”) when participants are learning to paying attention. Measuring such neuroplastic changes in the brain may have key implications for testing the effectiveness of interventions for managing attention disorders, both in children and adults.

Second, they will develop brain-machine interface technologies that can be used to train participants to voluntarily control activity in attention-related brain regions (“neurofeedback”). They will then try to find out whether achieving such neurofeedback control improves participants’ attention abilities. This type of interface may be developed into a non-invasive tool for training attention capacities in healthy individuals, as well as in patients with attention disorders.

Third, they will perturb and image brain activity in real-time, with millisecond precision (“neurostimulation”), to identify the role of particular brain regions in attention. This technology may be adapted in clinical settings for targeting brain regions implicated in disorders of attention, such as attention deficit disorder (ADD).

All of the experiments will be carried out at the state-of-the-art JN Tata National MRI facility at the Indian Institute of Science (IISc), which houses a 3T (Siemens Prisma) MRI scanner with integrated MR-EEG and MR-TMS setups.

“Broadly, the research findings from this proposal will advance our fundamental understanding of key principles by which attention works in the human brain and may pave the way for developing rational strategies to manage and treat attention disorders,” added Prof. Sridharan. 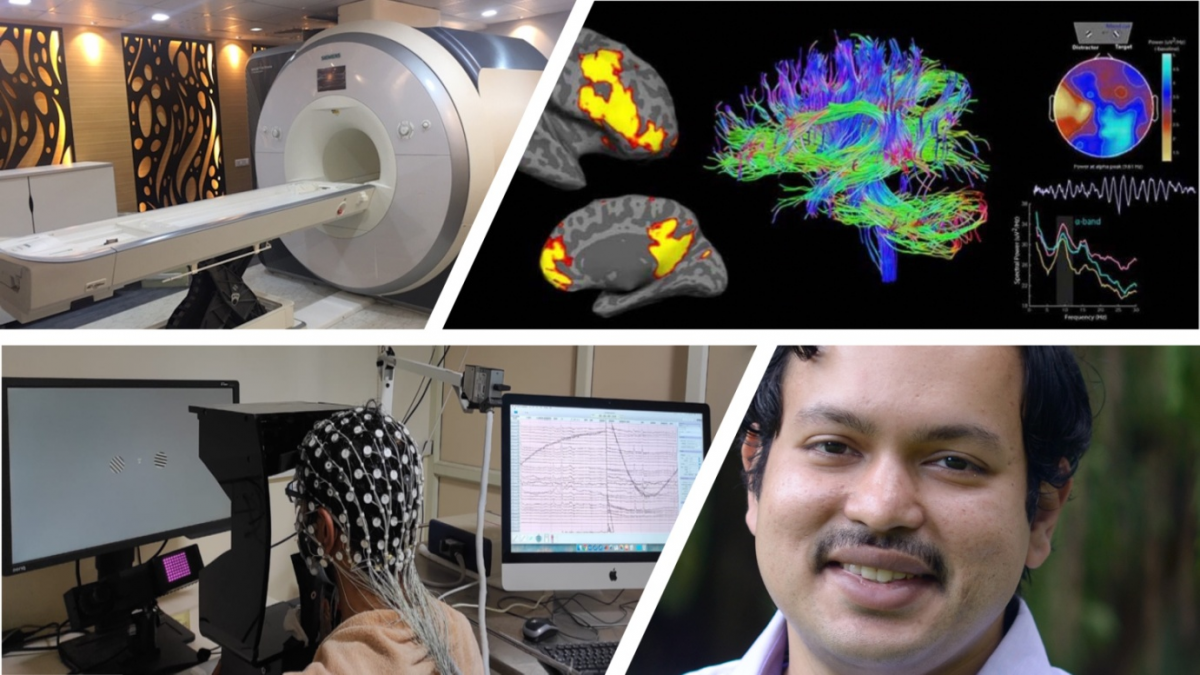 For more details, Sridharan Devarajan can be contacted at (coglabcns[dot]iisc[at]gmail[dot]com).