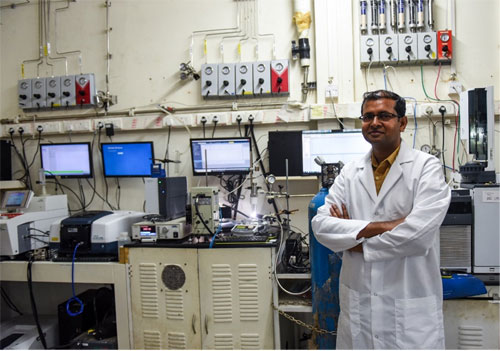 Professor Vivek Polshettiwar from Tata Institute of Fundamental Research (TIFR), Mumbai, is a recipient of this year’s Young Research Awards in Nano Science & Technology instituted by Department of Science and Technology, Govt. of India. He, along with his group, is working on the development of novel nanomaterials as catalysts to tackle climate change.

Prof Polshettiwar has developed next-generation nanocatalysts via the morphological control of nanomaterials, particularly dendritic fibrous nano-silica (DFNS), which has a high surface area and excellent physical and textural properties. The uniqueness of DFNS is its high surface area, which is produced by its fibrous structure instead of the formation of pores, making the large surface area easily accessible.

His group has shown the successful utilization of DFNS in a range of important applications, including catalysis and CO2 capture. DFNS is one of the few materials invented by an Indian which is now being explored by more than 150 groups worldwide for various applications, such as catalysis, photocatalysis, CO2 capture-conversion, sensing, detection and extraction of ions, supercapacitors, drug delivery and so on.

By using the techniques of nanotechnology, Prof Polshettiwar’s group has transformed yellow gold to black gold, by changing the size and gaps between gold nanoparticles. This work on ‘Black (nano)Gold published in the journal Chemical Science is a way forward to develop ‘Artificial Trees’which capture and convert CO2 to fuel and useful chemicals and CO2. It may become the main source of future clean energy for our society. The developed black gold acts like an artificial tree that uses CO2, sunlight, and water to produce fuel, which can be used to run our cars. Notably, black gold can also be used to convert seawater into drinkable water using the heat that black gold generates after it captures sunlight.

“Although at this stage, the production rate of fuel is low, in the coming years, we may be able to convert CO2to fuel using sunlight at atmospheric conditions, at a commercially viable scale and CO2may then become our main source of clean energy,” said Prof Polshettiwar.

A sustainable way to solve the energy problem is to generate alternative energy sources; however, there are challenges related to the storage of renewable electricity, preventing the development of these technologies. Thus, CO2 conversion to methane using renewable hydrogen has a great potential to provide a solution to the problems of excessive CO2 emissions, and the mismatch between renewable electricity production and its demand as well as storage.

Best-known catalysts for CO2 methanation are nanoparticles of metals. However, most of them suffer from the issue of stability as well as selectivity towards methane over Carbon dioxide. The best way to resolve the issue of catalyst stability is by replacing active sites (metal nanoparticles) with metal-free active sites which are catalytic as well as stable even at high temperatures. 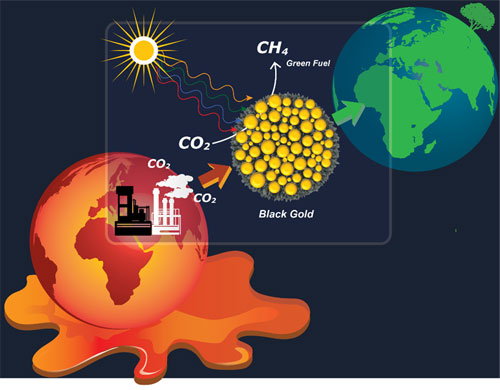 In another work published in Proceedings of the National Academy of Sciences of the United States of America, Prof Polshettiwar’s group has developed an engineering protocol to design a new catalyst system where metal nanoparticle active sites were replaced with defects as catalytically active sites. This is the first metal-free-ligand-free catalyst for CO2 conversion. The defects in nano-silica convert CO2 to methane with excellent productivity and selectivity. Furthermore, metal nanoparticles were not required, and the defect sites alone acted as catalytic sites for carbon dioxide activation and hydrogen dissociation, and their cooperative action converted CO2 to methane.

“We are taking a few tiny steps towards the utilization of 30 thousand tons of CO2 in the earth's environment, and the process is far away from real use (seems unrealistic currently). However, learning from our work CO2 capture and conversion, we hope that one day we will develop a commercially viable process for converting CO2 to fuel using water and sunlight by the urgently required fundamental breakthrough in the field of catalysis,” Prof Polshettiwar pointed out.

Having been awarded as Top-25 cited author in 2011 by Tetrahedron and Young Scientist Award at DSL-2012, Prof Polshettiwar received an Asian Rising Star lectureship at 15th Asian Chemical Congress (ACC), Singapore (2013), from Nobel Laureate Professor Ei-ichi Negish. In 2015, he was admitted as a Fellow of Royal Society of Chemistry (RSC), United Kingdom. He was also recognized as emerging investigator-material science and 175 faces of chemistry by RSC, UK. He was awarded the prestigious Materials Research Society of India - MRSI Medal 2019 and Fellow Maharashtra Academy of Sciences.