While chairing the Leadership session of Ministers from different States on the first day of the 2-day "Centre-State Science Conclave" at Science City in Ahmedabad, Dr Jitendra Singh said, his Ministry is proactively reaching out to Start-Ups across the country and providing seed funds for incubation and quality research with 50-50 investment mechanism from the DST and the Start-Ups. 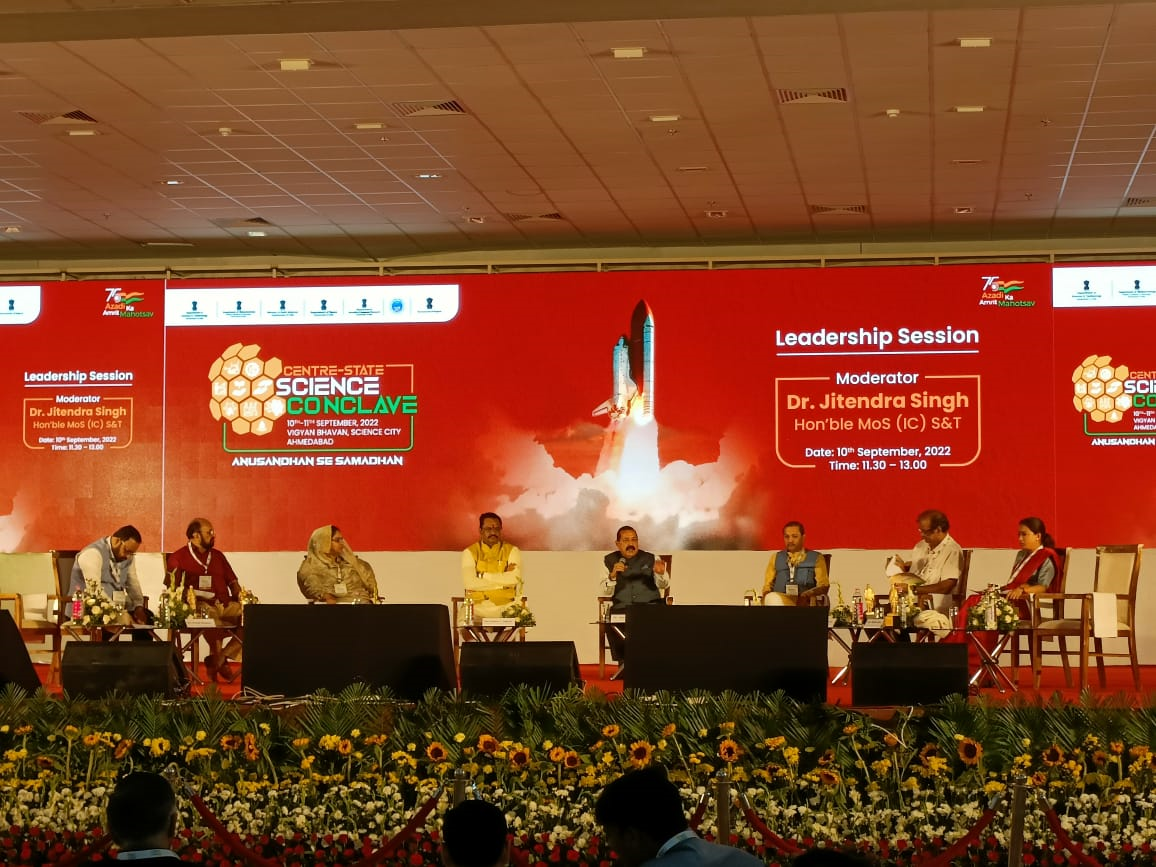 Referring to Prime Minister Modi’s launch of StartUp India from the ramparts of Red Fort in 2015, Dr Jitendra Singh said, India in its 75th year of Independence is now home to more than 75,000 Start-Ups taking a huge leap from 300 odd start-ups a few years ago. He said, India ranks globally 3rd in Start-Up ecosystem and also in terms of number of Unicorns.

Dr Jitendra Singh informed that a special session with the CEOs of over 100 Start-Ups and industry at the Centre-State Science Conclave’ in Ahmedabad will try to explore state specific solutions for unique problems faced by individual states. The Minister promised all support from all the 6 Science Departments to the potential start-ups willing to work with state governments with funding from all stakeholders.

Dr Jitendra Singh said, integration of Research, Start-ups, Academia and Industry is no longer an option but a dire necessity to attract young innovators in the country, particularly in the States to come out with cutting-edge and globally competitive products and solutions. He said, “Doubling Private Sector investment in R&D by 2030” and supplementing the country’s and State’s overall economy is a key agenda of the Conclave in tune with Atma Nirbhar goal of Modi Government.

Bowing to the will of State Ministers for proactive engagementsbetween Centre and Statesin S&T and creating a mechanism to facilitate the flow of STI information and data between Centre and States, Dr Jitendra Singh said, after two days manthan, small joint committees will be formed between the Centre and different cluster of states for taking forward the STI policy to its logical conclusion. The Minister said, Capacity Building of Scientists, technologists and professionals from States will be the key focus area and added that Centre and States will work together to promote Private sector participation in the State R&D and will try to put in position a robust and long term “Centre-State coordination and monitoring Mechanism in STI at the highest level.

Taking a cue from Prime Minister’s address at the conclave to open more Innovation Labs in the higher education institutes of the States, Dr Jitendra Singh promised that Department of Science and Technology at the Centre will provide all support including monetary support for establishing niche innovation centres in the States.

Dr Jitendra Singh informed that in tune with Prime Minister’s relentless efforts to facilitate innovation and entrepreneurship in the country, the first-of-its-kind Conclave will strengthen Centre-State coordination and collaboration mechanisms in the spirit of cooperative federalism to build a robust science, technology & innovation (STI) ecosystem across the country.

Referring to the theme of Leadership Session “Anusandhan se Samadhan”, Dr Jitendra Singh informed that important plenary sessions with State S&T Ministers are being organized during the two-day summit on issues like Agriculture, Innovation for producing portable drinking water including application of technologies like Desalination, Heli borne methods developed by DST, Clean Energy for All including S&T role in Hydrogen mission, Deep Sea Mission of MoES and its relevance for Coastal States/UT, Digital healthcare for All and Synergizing Science with National Education Policy.

Earlier, delivering the welcome address at the ‘Centre-State Science Conclave’, Dr Jitendra Singh lauded the vision and bold initiative of Modi for unlocking the Space Sector for private participation and now we are looking forward to Gaganyaan Mission. Similarly, joint ventures in Department of Atomic Energy is leading to establishment of new institutes and new research initiatives. The Minister said, the Deep Sea Mission along with manned submersible will also have an Integrated Mining System for mining Polymetallic Nodules from 6000 m depth in the central Indian Ocean along 7,500 kms of coastal length in the country.

Dr Jitendra Singh concluded that the two-day Science Conclave will focus on the inherent capacities and innovative spirit of Indian Youth to make India a global centre of research and innovation in this Amrit Kaal to fulfil Prime Minister’s dream of making India a frontline country in the world in its 100 year of Independence.

Science and Technology Minister, Government of Rajasthan Smt Zahida Khan, highlighted the need for self-reliance of women in STI in India

“Proactive engagement between states and centre in STI coordination mechanism can support each other in capacity building in emerging technologies, said Minster, Science, and Technology, Government of Odisha, Shri Ashok Chandra Panda.

Minister Science and Technology, Madhya Pradesh, Shri Om Prakash Saklecha, highlighted the need for engaging in discussions with centre on emerging technologies and an integrated approach in research.

Shri Jitubhai S Vaghani, Minister, Science and Technology, Gujarat, focused on the importance of scientific infrastructure and engaging stakeholders through popularisation of science and generating interest for participation.

The conclave provided a platform to discuss how the States can be proactive in aligning their policies and practices towards strengthening Centre-State coordination and collaboration mechanism in STI and explore solutions to their local problems through S&T interventions.