Air pollution in India is a serious issue, ranking higher than smoking, high blood pressure, child and maternal malnutrition, and risk factors for diabetes. At least 140 million people breathe air 10 times or more over the WHO safe limit and 13 of the world’s 20 cities with the highest annual levels of air pollution are in India.

The common sources of air pollution are household pollution, motor vehicles, industrial facilities and forest fires. It is responsible for the exacerbation of asthma and the increase in respiratory infections, especially in children. Increased morbidity and mortality, due to cardiovascular diseases including stroke, chronic respiratory diseases and cancers have also been attributed to air pollution.

Acknowledging that air pollution is a serious health hazard, Department of Science & Technology (DST) has taken several initiatives to combat air pollution. The Department has developed Wind Augmentation and Air Purifying Unit (WAYU) devices that can be positioned in an industrial complex, residential complexes, and schools in the vicinity of traffic road intersection/divider to tackle dust pollution.

The others technologies are in the process like Traffic Junction Air Pollution Abatement Plan; Landfill Fire Control Mechanism through integrated approach; Collecting Particulate Matter (PM) in air using filters placed on the top of a moving car; Suddha Vaayu; an electrical chamber for detection and mitigation of air pollution etc. 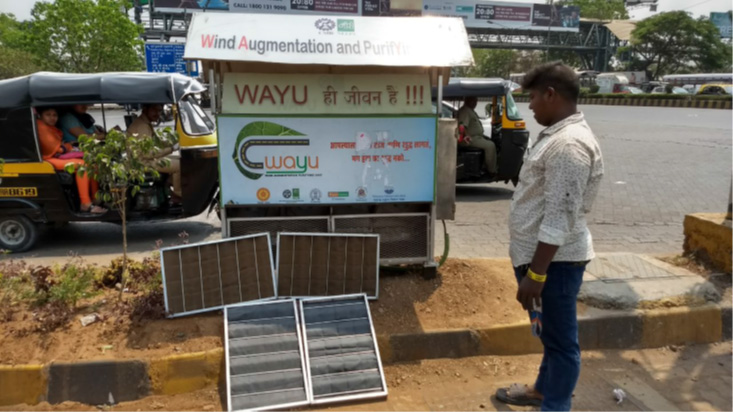 The Wind Augmentation and purifYing Unit (WAYU) is an air purification system that can be positioned in an industrial complex, residential complexes, and schools in the vicinity of traffic road intersection/divider. At such places, a significant amount of pollutants are emitted. It aims at removal of such pollutants which are ejected by the vehicles in the traffic. It allows reducing ambient air pollution levels at places, which have high concentration of pollutants. WAYU can reduce PM10, PM2.5, Carbon monoxide (CO), volatile organic compounds (VOCs), hydrocarbon (HC) emitted in the atmosphere.

The device has been installed at ITO Intersection and Mukarba Chowk and the device has been inaugurated by Hon’ble Union Minister for Science & Technology and Earth Sciences and Environment, Forest and Climate change, Dr Harsh Vardhanji on 25th September 2018.

National Environmental Engineering Research Institute (NEERI) and Department of Science and Technology (DST), Govt. of India are working on a system for air pollution control- ‘Wind Augmentation and purifYing Unit (WAYU)’ to improve the air quality at urban intersections in Delhi as part of an R&D project being funded by DST. Two air filtration units are deployed as a prototype at ITO intersection and Mukarba Chowk. CSIR-NEERI is working on a new design with the support of DST. Along with particulate matter, it will remove poisonous gases such as Volatile Organic Compounds (VOCs), Carbon monoxide.

This device works basically on two principles mainly Wind generation for dilution of air pollutants and Active Pollutants removal. The device has filters for Particulate Matter removal and activated carbon (charcoal) and UV lamps for poisonous gases removal such as VOCs and Carbon Monoxide. The device has one fan and filter for sucking and removing particulate matter. There are two UV lamps and half kg of activated carbon charcoal coated with special chemical Titanium Dioxide.

This device uses low-speed wind generators, appropriate size filters for long operation cycle with reasonable efficiency along with an oxidizing unit for removal of Carbon monoxide and Hydrocarbons including VOCs. The air is passed through the filters and where the particulates are removed. The air generators without the filter can help in augmenting wind turbulence in the near zone so that dilution takes place (mimicking nature). In the next level where active pollutants are removed, uses filters and oxidation system. The air is oxidized inside the specially designed with appropriate surface and retention time, within the oxidisers where the carbon monoxide, hydrocarbons, VOCs get converted to carbon dioxide. At the outlet of the device, the air has some residual velocity. This velocity of air creates turbulence in the atmosphere, which thereby helps bringing down the pollutant concentrations by the method of dispersion.

The device consumes a half unit of electricity each day for running for 10 hours each day. The cost of the device is Rs.60,000 per device. Maintenance cost is Rs.1500 per month.

This project aims to develop, investigate and demonstrate the capability and effectiveness of an air pollution control device in abating pollution in traffic junctions. This device works basically on two principles:

The device would use low-speed wind generators, appropriate size filters for long operation cycle with reasonable efficiency. It also will have an oxidizer unit for removal of Carbon-monoxide and Hydrocarbons including VOCs.

In this project, five designs of the air pollution control device with improved performance and enhanced throughput would be undertaken. Simulation studies would be conducted using computer-based models to understand the emission, dispersion and concentration of pollutants in congested traffic junctions. Closed-chamber testing of devices specifically designed for such traffic junctions would be conducted to assess the efficacy of the design. Further to demonstrate and conduct field trials, traffic junctions would be chosen and pre-installation studies would be conducted to assess the present air quality status. Based on the data generated from these studies, model studies would be undertaken and materials for improving filter efficiency and throughput as well as adsorbents/ activated carbon with different coatings for improved VOC removal would be explored to design air pollution control devices which would be deployed at selected locations of New Delhi. Post-installation, regular monitoring of the performance of the devices would be assessed. A detailed plan would be developed based on the study to suggest measures to manage air quality in traffic junctions.

Landfills are the ultimate disposal option adopted in India. In India, most of the landfills are non-scientific and non-engineered which do not have any leachate and gas collection systems.In India, most of the landfill fires are not reported and very less or no data is available on its occurrence and mitigation. Most of the cases reported are due to the human error or improper waste management practices followed at the landfill. Open burning of waste and landfill fires are among the largest sources of air pollution in Indian cities and towns. Landfill fires emit nearly 22,000 tons per year of pollutants into the air in the city of Mumbai alone (Figure 15). These pollutants include Carbon Monoxide (CO), Hydrocarbons (HC), Particulate Matter (PM), Nitrogen Oxides (NOx) and Sulfur Dioxide (SO2) plus an estimated 10,000 TEQ grams of  dioxins/furans (Annepu, R. K. 2012).

In view of these facts, it is very important to understand the cause, source, type and effects of fire in a dumpsite/landfill and to develop an integrated approach for its proper control.

​Suddha Vaayu: An Electrical Chamber for Detection and Mitigation of Air Pollution

The proposed project is divided into two phases. In the first phase, the prototype of the electrical mitigation chamber will be designed. The proposed prototype consists of three steps of the purification process. In the first step, large particles will be removed using metal mesh or other possible best means. A 5 µm pore diameter fiber filter will be used to remove PM10 in the second stage. In the third stage, a paper made rundfilter of 2 µm pore diameter will remove PM2.5. The walls of the mitigation device are coated with silica gel to remove the moisture content from the air. The mitigation device has the capability to run with both external power and energy generated with the solar panels installed on the device. In general 250 watts solar panel with 24 v input is sufficient to power this system. Preliminary results encourage and ensure that the proposed full designed SuddhaVaayu: electrical chamber will be expected to have an efficiency of 88 and 90% to remove PM2.5 and PM10. However, as a part of project deliverables, relevant tests on the efficiency of the chamber, estimations of operation cost, the zone of influence will be carried out. Based on the results from the first phase, multiple pilot chambers will be fabricated and set up at selected locations in Delhi in the second phase. The real-time efficiency of the pilot units will be tested using the integrated air quality sensor platform made and validated as a deliverable of this project.

The proposed project is divided into two phases. In the first phase, the performance of the existing purifier designed by Shudh Vayu LLC will be evaluated using CFD analysis for different scenarios pertaining to operating conditions of the car, meteorology, make and model of the car etc. The prototype consists of three stages of purification process. In the first step large particles will be removed using metal mesh. The second and third stages have foam and HEPA filters, respectively.

The main advantage of this purification system is its principle of pressure difference created due to air flow generated by a moving vehicle. Preliminary field tests carried out by Shuddha Vaayu LLC show encouraging results. However, as a part of project deliverables, relevant on field tests on the efficiency of the existing filter and the modified filter based on the CFD simulations will be carried out in this project. Additionally, a sensor fusion system which can be mounted on the top of the car will be designed and fabricated which will aid in measuring the real time concentrations of air pollutants. Such a sensor fusion system will aid in real-time air quality mapping of a city. As HEPA filters used in the current design are not washable and re-generatable, large scale usage of the purifier might end up creating solid waste management issues. Thus one of the objectives of this project is developing an affordable and washable air filter, which is of good efficiency.

Department of Science and Technology (DST) and Intel are collaborating to initiate “DST-Intel Collaborative research for Real-Time River Water and Air Quality Monitoring”. The aim of this initiative is to develop key technologies for sensing, communication and analysis of large-scale data collected from autonomous networks of perpetual/long-lived sensor nodes, followed by integration and deployment for water and air quality monitoring in real-time. The program will be administered by the bilateral institution namely the Indo-U.S. Science and Technology Forum (IUSSTF).

The goal of this research would be to enable the development and eventual deployment of low-cost, low-power, autonomous wireless sensor networks to provide a fine-grained view of several critical water and air quality metrics over large geographic areas (cities, rivers, watersheds etc.).These online sensor networks for river water and air quality monitoring will provide the pre-remedial quality status and would enable to assess the efficacy of post-remedial interventions based on real-time reliable factual data.