"Promotion of University Research and Scientific Excellence (PURSE)" is one of the Flagship Infrastructure programs of Department of Science and Technology, which was commenced in the year 2009 exclusively for the University sector. The main objective of the scheme is to strengthen the research capacity of performing Indian Universities and provide support for nurturing the research ecosystem and strengthening the R&D base of the Universities in the country. Department of Science & Technology has restructured and re-oriented PURSE in the year 2020.  A combination of I10 index of faculty members in the University, H index of the University along with NIRF Ranking is used to formulate the new criteria for selection of Universities under PURSE. Universities have been encouraged to carry out Mission mode research activities to focus on thrust areas which align with National priorities of Excellence in Manufacturing, Waste processing, Clean Energy, Water and Start up India. Universities are encouraged to harness their areas of excellence into thematic effort of an accomplished team, with clearly articulated objectives. The broad objective is to support potentially high impact, interdisciplinary research (both basic and applied) aligned to national priorities and missions. The research should also align well with goals of Self-Reliant India (Atma Nirbhar Bharat) and Start-up India etc. Universities supported under PURSE have been communicated to promote optimal utilization of these resources through a public notice. Programme Management Board comprising eminent academicians is involved in the process of evaluation of fresh proposals, reviews the technical progress and suggest mid-course correction’s in supported projects under PURSE.

Nature of Support: The Scheme will provide the support to acquire research facilities, research man- power cost, acquiring research consumables, funds for travel, organizing workshops and conferences, contingencies and maintenance of the facilities. Universities are encouraged to harness their areas of excellence into an inter-disciplinary thematic effort of an accomplished team, with clearly articulated objectives. Proposals towards individual R&D support would not be accepted under this Scheme. The synergy and focus of research may preferably be aligned to National Missions/ priorities.
Duration: The duration of support for each PURSE Project will be for a period not exceeding 4 years.

Duration: The duration of support for PURSE Project will be for a period of 4 years.

Eligibility: The Scheme is exclusively for the University sector. Other academic Institutions/ IITs/NITs/IISERS/Colleges are not eligible to apply under the Scheme. UGC Recognized Central Universities/ State Funded Universities/Deemed Universities and Private Universities are eligible to apply under the Scheme. The eligible university should not have received major funding from UGC or government major funding of more than Rs 10.0 crores in the last 5 years, or should not have received support under SAIF/ SATHI or PURSE program of DST in the last 10 years from the date of sanction order. All other agency-based Universities are excluded from the scope of PURSE support. For the host institute (HI) irrespective of their status, as Government / Non- Government, the funding pattern & its mode will be maintained at 75:25 ratio, i.e., DST share would be supporting 75% and the management of the Government / Non-Government Host Institute would need to provide 25% of the total sanctioned cost of the project.

Proposals are invited in three Categories
The quantum of support and minimum eligibility conditions is organized into three categories as given below.

Support given so far

Since the initiation of the program till 2019, the selection of the Universities was carried out on the basis of 10 years aggregate publications and h-index towards creating and nurturing the research ecosystem among performing universities in the country. The selection criteria were based entirely on research performance associated with quality for a period of one decade. Since the initiation of the program, a total of fifty (50) performing universities have been supported ranging from Rs 30.0 Crores to Rs 6.0 Crores for 4 years’ period based on publication output in Scopus International Database.

Four sets of study period (each of 10 years’ duration) have been carried out to select the Universities under PURSE. 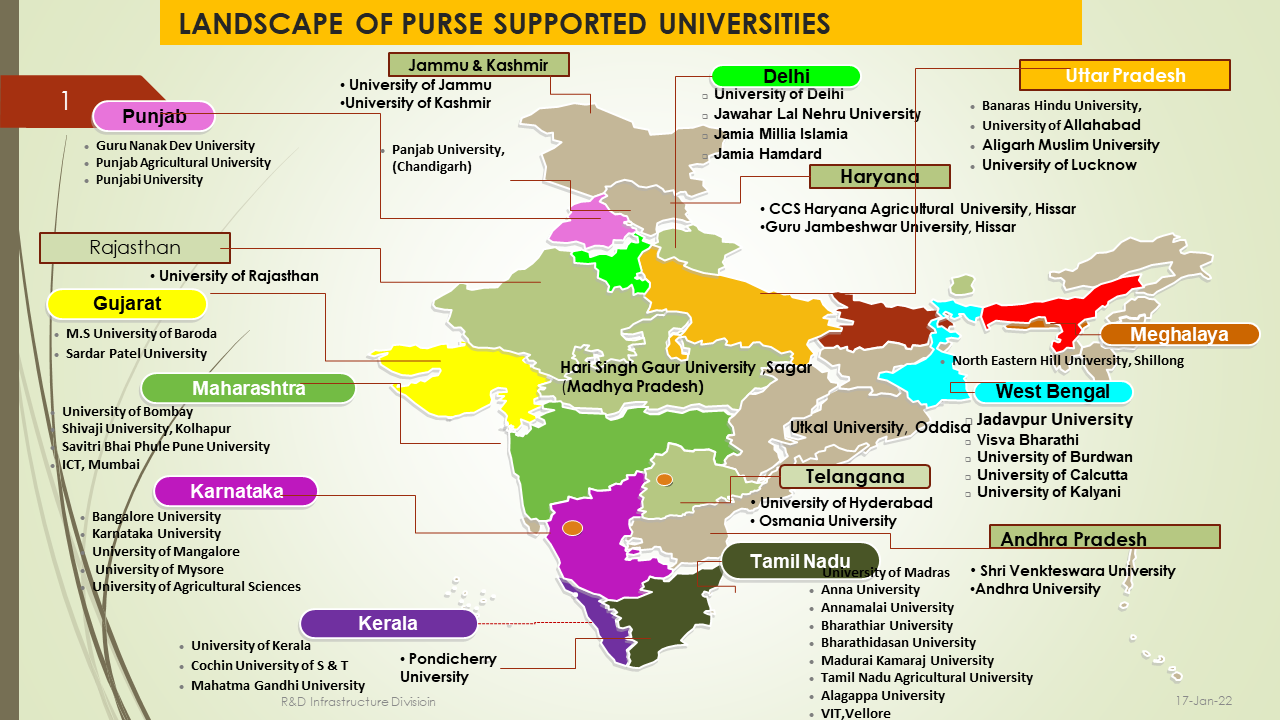 Some of the Success stories